The two natural forces available for moving air through and out of buildings are wind forces and temperature difference between the inside and the outside. Air movement may be caused by either of these forces acting alone, or by a combination of the two, depending on atmospheric conditions, building design, and location.

In considering the use of natural forces for producing ventilation, the
conditions that must be considered are as follows:
? Average wind velocity
? Prevailing wind direction
? Seasonal and daily variations in wind velocity and direction
? Local wind interference by buildings and other obstructions

When the wind blows without encountering any obstructions to change its direction, the movements of the airstream (as well as the pressure) remain constant. If, on the other hand, the airstream meets an obstruction of any kind (such as a house or ventilator), the airstream will be pushed aside as illustrated in Fig. 3-1. In the case of a simple ventilator (see Fig. 3-2), the closed end forms an obstruction that changes the direction of the wind. The ventilator expands at the closed end and converges at the open end, thus producing a vacuum inside the head, which induces an upward flow of air through the flue and through the head. 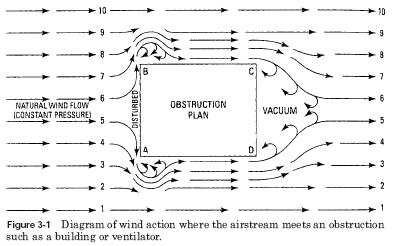 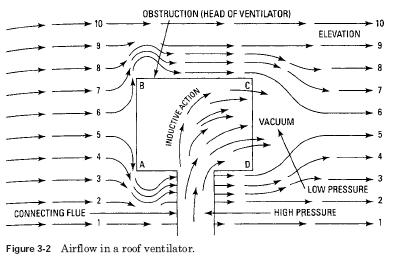 Perhaps the best example of the thermal effect is the draft in a stack or chimney known as the flue effect. The flue effect of a stack is produced within a building when the outdoor temperature is lower than the indoor temperature. It is caused by the difference in weight of the warm column of air within the building and the cooler air outside. The flow caused by flue effect is proportional to the square root of the draft head, or approximately.

Note that when wind and temperature forces are acting together, even without interference, the resulting air flow is not equal to the sum of the two estimated quantities. However, the flow through any opening is proportional to the square root of the sum of the heads acting on that opening. When the two heads are equal in value, and the ventilating openings are operated so as to coordinate them, the total airflow through the building is about 10 percent greater than that produced by either head acting independently under ideal conditions. This percentage decreases rapidly as one head increases over the other. The larger head will predominate.

Roof ventilators
The function of a roof ventilator is to provide a storm and weatherproof air outlet. For maximum flow by induction, the ventilator should be located on that part of the roof where it will receive full wind without interference. Roof ventilators are made in a variety of shapes and styles (Fig. 3-3). Depending on their construction and application, they may be termed as stationary, revolving, turbine, ridge, or syphonage.